Cataratas del Iguazu: One of the "Seven Wonders" 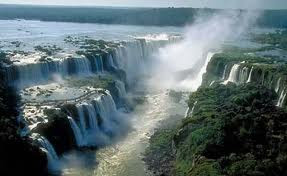 This blog is about Buenos Aires Travel Information, but we can´t let pass a huge piece of news like this.  Iguazú Falls was recognized last November 11th. as one of the "Seven Wonders" by  the fundation "New Seven Wonders".

Misiones Mayor said "the tourism promotion is priceless" and he was very grateful with all the people that supported this argentinian participation such as Messi, Ginobili, Scola, among others.

Iguazu Falls, in Iguazu River, are one of the world's largest waterfalls. They extend over 2,700 m (nearly 2 miles)  in a semi-circular shape.  Of the 275 falls that collectively make up Iguassu Falls, "Devil's Throat" is the tallest at 80 m in height. Iguazu Falls are on the border between the Brazilian state of Paraná and the Argentine province of Misiones, and are surrounded by two National Parks (BR/ARG). Both are subtropical rainforests that are host to hundreds of rare and endangered species of flora and fauna.